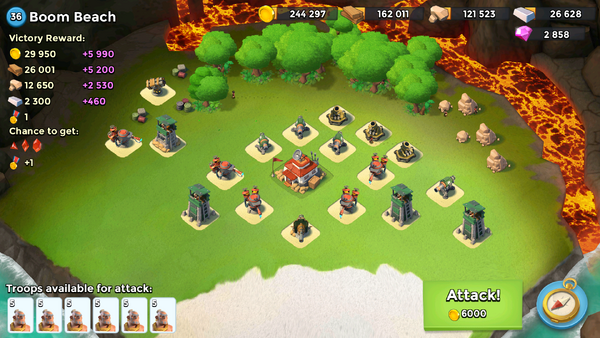 Walkthrough: Use Artillery or Barrage to destroy the Rocket Launcher and Boom Cannon. Deploy your Troops on the left. The tanks will easily destroy the Sniper Tower and be out of range of the Flamethrowers. They will then attack HQ. Some of your Tanks may get pushed into firing range of a rear Cannon, use artillery as necessary to destroy it or shock them with a Shock Bomb.

If you use Grenadiers with your Tanks, you will need to destroy Sniper Tower in addition to the Rocket Launcher and Boom Cannon before deploying them.

Retrieved from "https://boombeach.fandom.com/wiki/Base:Boom_Beach?oldid=133425"
Community content is available under CC-BY-SA unless otherwise noted.