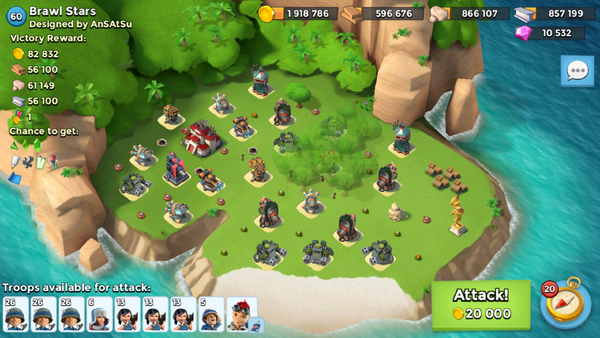 Walkthrough: For low level players with limited Gunboat energy: use Cpt. Everspark's universal remote ability to hack the LHS Boom Cannon and Shock Launcher near the beach, other defenses would destroy these two structures. You do not have to use Barrage/Artillery for this because it would cost more Gunboat energy. Make sure that Cpt. Everspark survives using Smoke Screens. Then Flare and deploy all the troops on the RHS of the beach (make sure to Flare because the Flare you used while hacking is likely still on, deploying troops without another Flare would cause them to move towards the last Flare, instead of where you want them to go). After you deployed the troops, immediately shock the two remaining Boom Cannons near the beach. You would need to destroy at least the one closer to you before they become active again. Afterwards, Cpt. Everspark's Critters should distract the second one long enough for you to destroy it. Then you need to go right and the remaining defenses should provide little challenges. You would need 48 Gunboat energy, excluding those needed to deploy Tanks, during the deployment stage (hacking 2 times, 3 Smoke Screens, 3 Flares and one Shock Bomb).

Retrieved from "https://boombeach.fandom.com/wiki/Base:Brawl_Stars?oldid=172468"
Community content is available under CC-BY-SA unless otherwise noted.