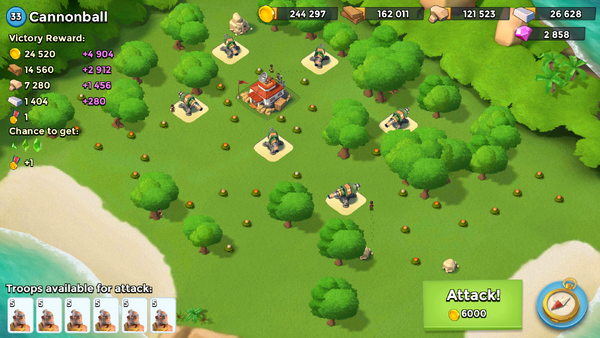 Walkthrough: Use a Barrage on the middle of the set of Mines on the left side of the base. Deploy your Troops on the topmost part of the left beach and Flare them to the leftmost Cannon. Use Shock Bombs on the two leftmost Cannons while you destroy them. If damaged by the Mines, the Medics will heal your Troops. If you don't have any Medics, consider using some Medkits to heal your Riflemen throughout the battle. Use Artillery to trigger the two topmost Mines. When the three Cannons to the left of the Headquarters are destroyed, Flare your Troops to the top of the Headquarters and destroy it.

Walkthrough: Use a Barrage on the cluster of Mines on the far left. If you have enough Gunboat energy, use Artillery and Barrage to destroy the topmost Cannon, but this is not necessary. Deploy your Grenadiers & Medics on the far left of the left beach and Flare them to behind the leftmost Tree, so they are out of range of the leftmost Cannon. If damaged by the Mines, the Medics will heal your Troops. The Grenadiers will be out of range of the Cannons and destroy them without taking damage, then will target the Headquarters. Optionally, you can deploy a Tank or Tanks before deploying Grenadiers and Medics in order to destroy the leftmost Mines. The Tanks will NOT be out of range of Cannons and can be destroyed, so minimize the amount of Tanks you deploy if you choose this strategy. RecommendedArmy3 = Tanks

Walkthrough: Begin by using Barrage and Artillery to take out the bottom-middle Cannon. Then, deploy all troops on the left-ish area of the beach, and shock the bottom-left Cannon while they destroy it. If positioned correctly, they should destroy the Headquarters without coming into range of any more of the Cannons. If not, Flare them so that they are not.

Retrieved from "https://boombeach.fandom.com/wiki/Base:Cannonball?oldid=173978"
Community content is available under CC-BY-SA unless otherwise noted.