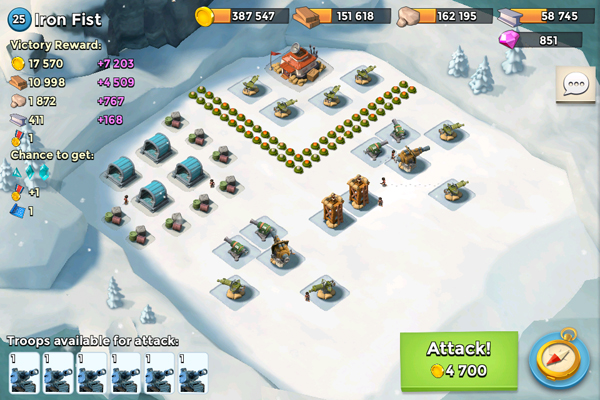 Walkthrough: Use Barrages and Artillery on the Boom Cannon and Cannons on the bottom left - note that they are all touching, so a single Artillery will damage all three if used correctly. When the Boom Cannon and Cannons are destroyed, deploy your Tanks as far to the southwest as possible. Let them take out the two Machine Guns. Ignoring the Sniper Towers, Flare them up into the northwest corner, beside the leftmost Iron Storage. From here they can start racking up plenty of Energy on these soft targets. Meanwhile, use a Barrage to open a path through the Mines near the leftmost Machine Gun by the HQ. When the Tanks have finished destroying the Supplies and Iron Storages, use a Flare if necessary to guide them through the gap. This should keep your Tanks out of range of anything that can seriously hurt them while they take down the HQ.

Walkthrough: Barrage the easternmost part of the cluster of Mines then deploy your troops on the right side of the beach. As there are a good deal of single-target defenses Riflemen can easily overwhelm the Cannons, Boom Cannons and Sniper Towers that exist on the base. Have them hug the right side of the base, and eliminate the Machine Guns that lay before the minefield, Shocking them if necessary. As both Machine Guns on the right side are taken down have them defeat the remaining Cannons and Boom Cannons, then charge for the Machine Guns surrounding the HQ. Use Shock Bombs to immobilize them and a Flare to make your Riflemen target the Machine Guns. If you don't have enough Gunboat Energy for that or if your Riflemen are damaged by the Mines use a Medkit to avoid losing them. Once at least three Machine Guns surrounding the HQ are taken down (downing all four are better and highly recommended) then flare the HQ, using a Medkit to support them if you didn't destroy the last Machine Gun.

Walkthrough: This has been seen to have a very low-level HQ, so in some cases you might be able to just level the HQ purely with your Gunboat.

Retrieved from "https://boombeach.fandom.com/wiki/Base:Iron_Fist?oldid=174961"
Community content is available under CC-BY-SA unless otherwise noted.