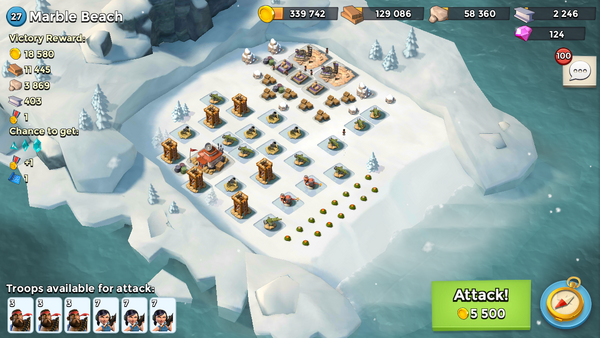 Walkthrough: Destroy as many Sniper Towers as possible, starting from the north side while leaving enough Gunboat Energy for deploying the Tanks. Once you have eliminated as many Sniper Towers as possible, deploy the Tanks on the east side of the beach, next to the pair of Machine Guns on the far east of the base. Have the Tanks destroy the Machine Guns, then flare them towards the group of support buildings in the north-east corner. Have the Tanks destroy the massive number of support buildings, accumulating a large amount of Gunboat Energy in the process, then charge for the Mortars, supporting the Tanks with a Medkit.

Once the Mortars are taken out, flare to the far north where they should encounter the northernmost Machine Gun (and the Sniper Towers that you should have previously eliminated prior to the landing of the Tanks). Destroy that Machine Gun, then flare to the north-west where they should easily deal with one Sniper Tower (if you did not destroy it) and one Mortar, while under any necessary support from Medkits and Shock Bombs. Finally, let the troops attack the Headquarters. If the Sniper Tower next to the HQ is firing upon your Tanks then use a Shock Bomb on it if necessary.

Retrieved from "https://boombeach.fandom.com/wiki/Base:Marble_Beach?oldid=175005"
Community content is available under CC-BY-SA unless otherwise noted.