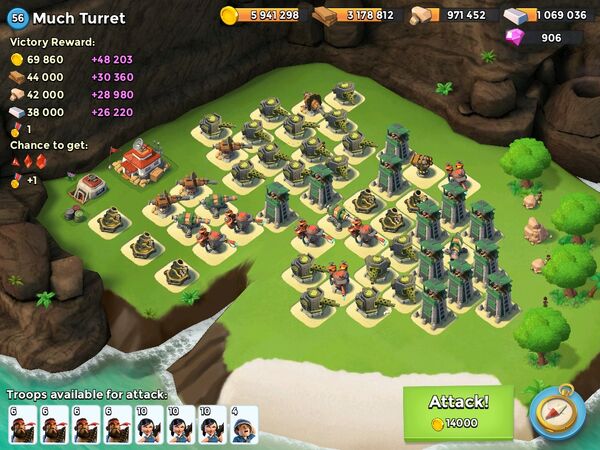 Walkthrough: Use Artillery to destroy the group of two Boom Cannons and two Cannons in front of the Boom Cannon the HQ. Pre-smoke the beach, Flare the bottom-left-most Machine Gun and deploy troops. As they run to the Machine Gun throw a Smoke Screen immediately, before defenses destroy them. Flare one of the two left Flamethrowers before your smoke expires, and throw smoke on your Warriors as appropriate. Afterwards, use one last Flare on the HQ, using Smoke Screens to cover your Warriors as they move from the Flamethrowers to the HQ. Proceed to shock the left half of the group of top Machine Guns and the three Mortars; once that's done you should not lose too many troops as they take down the HQ.

Walkthrough: This strategy requires a fairly high amount of gunboat energy. Using Artillery and Barrage, destroy the group of 2 Boom Cannons and 2 Cannons and the line of 3 Mortars. Then, use Smoke Screens to Flare a group of Zookas near the HQ. They should be able to take down the HQ out of range of all the other defenses.

Walkthrough: Use Artillery to take out the quartet of 2 Boom Cannons and 2 Cannons. Use Barrage to take out the Boom Cannon nearest the HQ while damaging Machine Guns and one Barrage against the right Rocket Launcher if you can't take it out with a single Artillery shot. Use 1 Artillery each on the touching Mortar+box, and the other two Mortars. Use 1 Artillery each to clear the remaining closest Machine Gun pairs that were around the Boom Cannon. Use as many Critters as possible in the corner northwest of the Headquarters.

Retrieved from "https://boombeach.fandom.com/wiki/Base:Much_Turret?oldid=140099"
Community content is available under CC-BY-SA unless otherwise noted.