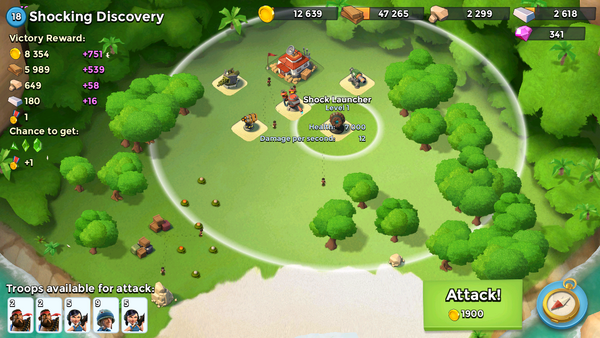 Walkthrough: Damage or destroy the Shock Launcher with Artillery or Barrage. Deploy your Troops on the right side of the beach and Flare them to the Shock Launcher (if necessary). Once it turns to fire, use Shock Bombs to keep it stunned until your Tanks destroy it. Then re-Flare them to somewhere on the left side of the map near the middle row of Trees. Proceed to destroy the Rocket Launcher, Machine Gun, and Flamethrower, while staying out of the Cannon's range. Finally, Flare your Tanks to the top left to have them take down the Headquarters out of the Cannon's range.

Walkthrough: Destroy the Rocket Launcher with Artillery or Barrage. Deploy your Troops on the right side of the beach and Flare them to the Shock Launcher.Once they start attacking it Shock Bomb the Flamethrower and Cannon,keep doing so until they're all destroyed or you run out of GBE,then flare to the top-right of the HQ,if you have any remaining GBE shock the Machine Gun or drop a Medkit on top of your warriors.

Walkthrough: Use Artillery to bomb the cannon until it's gone. Drop your troops as they make their way towards the Shock Launcher. Use Shock Bombs on the Rocket Launcher and/or Shock Launcher until you run out of GBE. This straightforward strategy will be enough to defeat the base.

Retrieved from "https://boombeach.fandom.com/wiki/Base:Shocking_Discovery?oldid=175026"
Community content is available under CC-BY-SA unless otherwise noted.