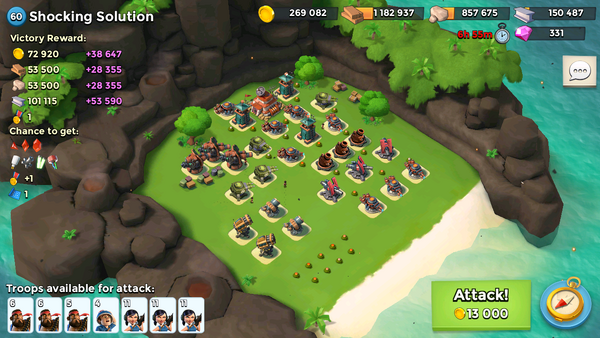 Walkthrough: Destroy the three Boom Cannon with two Barrages (one on each side of the middle Boom Cannon) and a few Artillery strikes. Deploy your Tanks on the far left, but your Medics a bit farther behind so they don't get hurt too early. As the Tanks start shooting at the Rocket Launchers and Shock Launchers, use a Shock Bomb or two to speed things up. Also, avoid the nearest Cannon. When that's done, Flare to the top left corner, and let your Tanks kill the Sniper Towers, Machine Guns, and Flamethrowers.

Walkthrough: Destroy the three Boom Cannon with two Barrages (one on each side of the middle Boom Cannon). Two level 16 Barrages is sufficient in 90-95% of the cases if you shoot in the correct spots. Deploy Scorchers in the left corner and drop Critters on the front Shock Launcher. As the Scorcher progress into the base drop another pack of Critters on the first or second Shock Launcher and/or shock/shoot/critter Cannons. Enjoy the show.

Retrieved from "https://boombeach.fandom.com/wiki/Base:Shocking_Solution?oldid=151511"
Community content is available under CC-BY-SA unless otherwise noted.