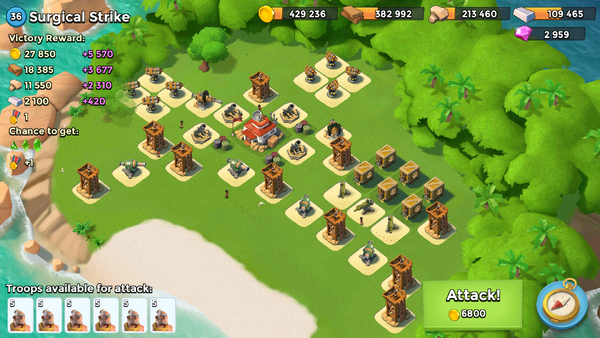 Walkthrough: Deploy and Flare your Troops to the Headquarters and cover them with Smoke. Use a Shock Bomb on the middle of the Rocket Launcher and Boom Cannons once your Warriors begin to attack.

Walkthrough: Destroy the Boom Cannons with Artillery and Barrage. Then, let your Tanks roll through the base. The Sniper Towers and Cannons can be Shocked if need be.

Walkthrough: Use Artillery to destroy the higher-leveled group of 4 Rocket Launchers all at once, as well as the Boom Cannon east of the Headquarters. If you still have enough Gunboat Energy, destroy as many Cannons as you can starting from the easternmost ones. Deploy your Troops on the right side of the beach, using a Smoke Screen to cover any Troops on the left side of the beach as they head to the right side where the east pair of Sniper Towers are located. Allow them to work through the Sniper Towers and Cannons, Shocking anything if necessary. As they run through the east side of the base, allow the Medics to outheal the damage from the other four Rocket Launchers. As the entire east side of the base is cleared, attack the Headquarters from the south-east. The other Boom Cannon should not interfere.

Retrieved from "https://boombeach.fandom.com/wiki/Base:Surgical_Strike?oldid=133754"
Community content is available under CC-BY-SA unless otherwise noted.