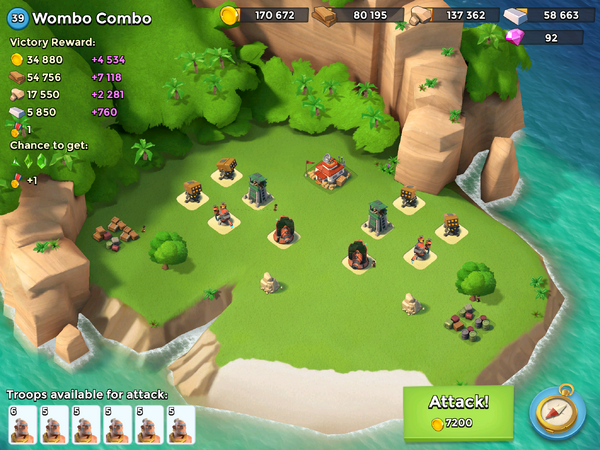 Walkthrough: Using a single Artillery, take out the four Supplies on the left hand side. Then using Barrage and Artillery, destroy the two left hand Rocket Launchers. Deploy all your Warriors as far right as possible - they should run to and attack the right hand Supplies. Drop a Shock Bomb in between the Sniper Tower, Flamethrower and Boom Cannon. Let your Warriors destroy the right hand Defenses. Then Flare the HQ and use a Shock Bomb in the middle of the remaining Sniper Tower, Flamethrower and Boom Cannon to help.

Walkthrough: Using a single Artillery, take out the four Supplies on the left and right hand side to gain Gunboat energy as described above. Then using Barrage and Artillery, destroy the two Boom Cannons. Deploy your Tanks, then the Medics. The Medics should be able to heal the intermittent damage from the Rocket Launchers while the Tanks destroy the remaining defenses then finish off the Headquarters. If done right you should have zero troop casualties.

Retrieved from "https://boombeach.fandom.com/wiki/Base:Wombo_Combo?oldid=174953"
Community content is available under CC-BY-SA unless otherwise noted.