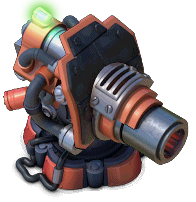 "The Boom Cannon fires devastating shots but takes a while to reload. Even the strongest armor is no match for the Boom!"

Reason: New unique looks for all levels (except 14, which shares with 13)

Input total Statue bonuses to modify the statistics in the table below accordingly
Retrieved from "https://boombeach.fandom.com/wiki/Boom_Cannon?oldid=174875"
Community content is available under CC-BY-SA unless otherwise noted.