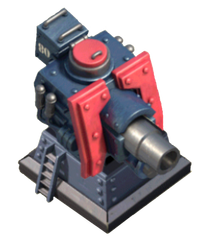 "Cannons fire powerful, large caliber shells towards one target at a time. This makes them ideal against heavy and armored enemies, but less effective against massed infantry."

Retrieved from "https://boombeach.fandom.com/wiki/Cannon?oldid=181063"
Community content is available under CC-BY-SA unless otherwise noted.