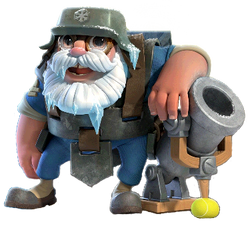 "These Bombardiers throw ice bombs against enemy buildings, slowing them down and dealing moderate damage. They require extra energy to deploy as they are slightly older (but more experienced) than most troops."

Retrieved from "https://boombeach.fandom.com/wiki/Cryobombardier?oldid=181032"
Community content is available under CC-BY-SA unless otherwise noted.