Having a strong base layout is one of the most important parts of Boom Beach. The stronger your base is, the greater your chance of repelling attacks, collecting Intel, and saving your Resources and Victory Points.

Everyone has their own way to set up their base, but there are four key parts of a base design that need to be taken into account.

Placing your Headquarters is the most important part of your base design because your main goal is to protect it. Different base types call for different placements which you can read about below. There are a few general rules, however:

Ice Statues and your choice of how many of each type to use can critically affect not only your main base defense but also that of all of your Resource Bases. Remember that you will be trading offensive and production potential for defense when you deploy Ice Statues, but if you want a truly impenetrable base, a good set of Ice Statues is the way to go. If you are looking to gain Victory Points, you want to have as many Ice Statues as possible while still having the offensive Statues to defeat the bases that you face.

One of the most devastating sets of Ice Statues is having a Building Damage masterpiece, a Building Health masterpiece, and as many of the other slots filled with Building Health Guardians as possible. Nearly every good attack strategy involves destroying critical defenses either with the Gunboat before landing troops, or very quickly afterwards. With extremely high-health buildings, not only will it take far more Gunboat energy to kill critical buildings, but properly placed turrets improved by many Ice Statues can starve out nearly any known army configuration.

Your Defensive Buildings are the only things repelling attacks on your base, so you need to know how to place them. If you place them badly, other players can take out your base with ease. Smart placement will win you diamonds, intel, and save your Victory Points and resources. Below you can see which troops every defense is best and worst at dealing with.

Defensive Buildings and their Strengths and Weaknesses

Note: Sky Shield was omitted due to its strengths and weaknesses varying based on the defenses it protects.

WARNING: Don't have your defenses touching any other building besides the Headquarters because of its great amount of health. Artillery has splash damage, meaning if you have buildings touching each other, the Artillery will deal its full damage to every building which can damage or destroy all of those buildings.

Placement of non-defensive buildings is important because the Gunboat energy an attacker gets from destroying them can win or lose the attack. In any base design, you want as many defenses as possible to be protecting your extra buildings. Each base design has its own way of protecting them, and you can adjust their placement to fit your base's strategy as much as possible. With economy and support buildings, it is okay to have some of them touching because it is not typically worthwhile to use a Barrage or Artillery to destroy two non-defensive buildings purely for the energy. Do not, however, place the buildings where four touch on one spot because this is usually worth it to destroy them for energy.

In this section you will learn about general types of base designs. Each section will discuss that base's strengths and weaknesses and the general type of placement it should have. Each base has a recommended level of Headquarters it should be used at.

Recommended for around Headquarters levels 1-9

For the lower HQ levels, the best place is to have your HQ on the right edge of your base, next to your pier so that it is easier to protect with lower level defenses. With this layout, you do not have many defense buildings, but it is still easy to defend yourself by taking advantage of the few defenses that you have. With the HQ up against the docks, it's easy to defend the two main directions from which your opponent can attack from: the top and left side. 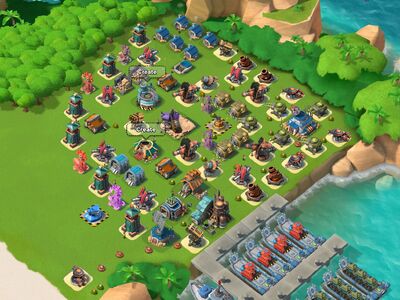 Recommended for around Headquarters levels 13+

This type of base is built to be good against all attack strategies in general and defend especially well against Smokey Warrior attacks. The HQ can be placed all the way in the corner once you unlock HQ level 13, which allows the removal of all Obstacles. This base makes Warriors take a longer run before reaching the HQ. However, many support and economy buildings have to be placed in front of everything.

Recommended for around Headquarters levels 10-20

This base type is designed to make it very hard for any attack strategy to get Gunboat energy from support and economy buildings. All of the defensive buildings are placed right against the beach, and the non-defensive buildings are spread out around the perimeter of the base, making it harder for attackers to gain energy by destroying those buildings. Attacking troops are thrown right into the fray, and the sides of the base are defended with Boom Mines and all of the many other defenses in range which makes it very deadly to flank around the base. Without the energy from the non-defensive buildings, attackers have a very limited number of Gunboat Weaponry uses. 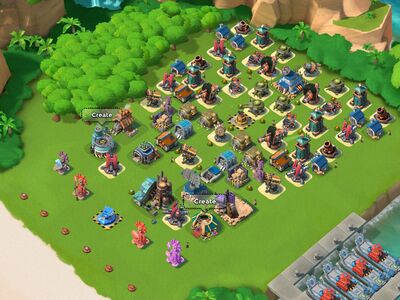 Recommended for about Headquarters levels 19+

This base type is meant for upper level players who frequently face Smokey-Warrior/Smokey-Heavy-Warrior and Smokey-Heavy-Zooka attacks. The HQ is placed towards the back, and buildings are placed in a rectangle shape through the center of the island. Most of the defenses are focused on the HQ. Defenses that excel at dealing with Zookas are spread out as much as possible. Typically, a Shock Blaster or Lazor Beam is placed in front to make attackers use more Smoke Screens or else have several troops taken out as they enter the base and head for the HQ.

Community content is available under CC-BY-SA unless otherwise noted.
Advertisement