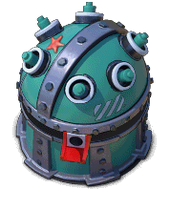 "The mine wasn't dangerous enough, so they put a cannon on it! Potent defensive cannon that when destroyed detonates with a powerful explosion, causing damage in an area."

Input total Statue bonuses to modify the statistics in the table below accordingly
Retrieved from "https://boombeach.fandom.com/wiki/Flotsam_Cannon?oldid=180207"
Community content is available under CC-BY-SA unless otherwise noted.