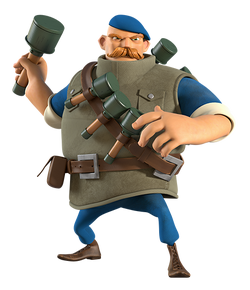 "I hear you chaps have been looking for an explosives expert. Well, you struck lucky! I'll toss a few mashers their way, and Bob's your uncle - those Blaggards go up in smoke!"

Retrieved from "https://boombeach.fandom.com/wiki/Grenadier?oldid=181152"
Community content is available under CC-BY-SA unless otherwise noted.