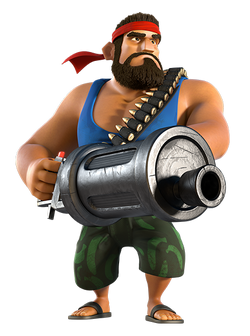 "Hey, great! The HQ is finally big enough for us Heavies. We're tough enough to walk straight into the line of fire. Let's go get them!"

Retrieved from "https://boombeach.fandom.com/wiki/Heavy?oldid=181045"
Community content is available under CC-BY-SA unless otherwise noted.