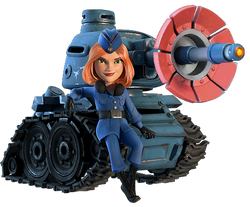 "Breakthrough in the battery tech has allowed Blackguard to mount Lazor Beams on tanks. It will burn its way through enemy defenses with pinpoint precision."

Retrieved from "https://boombeach.fandom.com/wiki/Lazortron?oldid=181038"
Community content is available under CC-BY-SA unless otherwise noted.