"I am Lieutenant Hammerman of the Blackguard."

^ a is your Attack Cost when you first scout the base. When you destroy the base, you receive the normal Gold reward plus your Attack Cost at the time you scouted the base. Like all islands, the Resource reward will not increase after the base has been scouted.

Boss bases drop fixed numbers of Power Stones when destroyed, and you have additional chances to get more Power Stones from the usual chance which is explained on our Power Stone page. 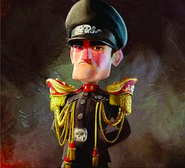