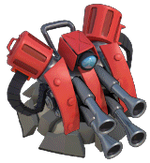 "Welcome to the field test of our new and improved MMG 9000: Massacre Machine Gun!"

^All shots may not hit, so the game's stated damage per second is approximate. Accuracy improves as targets move closer.

Retrieved from "https://boombeach.fandom.com/wiki/MMG_9000?oldid=175392"
Community content is available under CC-BY-SA unless otherwise noted.