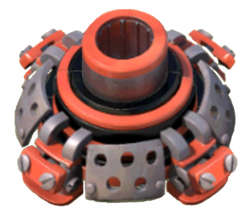 "The Mortar is an artillery piece that is effective at medium to long range, but can't target enemies right next to it. Mortar shells explode and deal damage to all troops in the area of effect."

Retrieved from "https://boombeach.fandom.com/wiki/Mortar?oldid=181102"
Community content is available under CC-BY-SA unless otherwise noted.