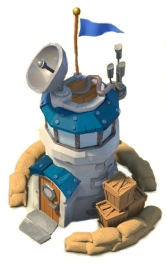 "Protect your Resource Base! You will lose the resource base if this building is destroyed in an enemy attack. Resource Bases produce resource shipments that you can collect from your home base."

Input total Statue bonus to modify the statistics in the table below accordingly
Building Health+%ApplyReset
Retrieved from "https://boombeach.fandom.com/wiki/Outpost?oldid=176261"
Community content is available under CC-BY-SA unless otherwise noted.