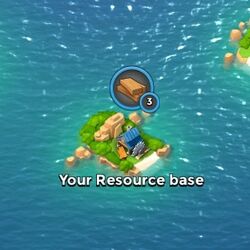 "An additional base which ships a particular resource to your home base. If another player destroys the Outpost in your Resource Base, you will lose it to them. The buildings on a Resource Base will be upgraded when it changes owners."

Map of the Archipelago with all Resource Base Locations

Start a Discussion Discussions about Resource Base