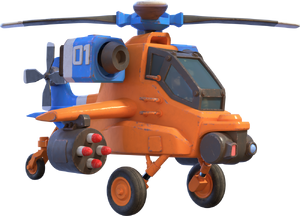 Rocket Choppas are orange in color, with 2 Zookas in the cockpit. A large rotor is on top, and a missile pod is on each side. It has blue accents. It has two wings with rocket launchers underneath. It has 3 wheels underneath the body.

Community content is available under CC-BY-SA unless otherwise noted.
Advertisement