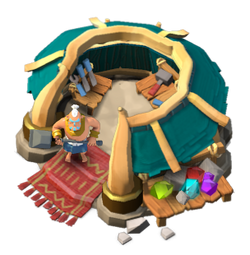 "The Sculptor creates powerful statues that can help our war effort tremendously. Each new statue is unique, and its powers can't be predicted! You can salvage a statue to recover a refined Power Stone. Upgrade the Sculptor to deploy more statues. You can only have one Masterpiece of the same bonus type."

Input total Statue bonus to modify the statistics in the table below accordingly
Building Health+%ApplyReset
Retrieved from "https://boombeach.fandom.com/wiki/Sculptor?oldid=181073"
Community content is available under CC-BY-SA unless otherwise noted.