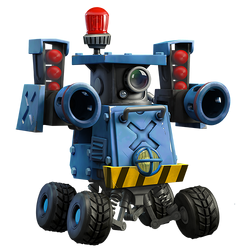 "The Seeker is programmed to attack the nearest Engine Room, ignoring everything else. It can't be healed so make sure the path is clear!"

Input total Statue bonuses to modify the statistics in the table below accordingly
Retrieved from "https://boombeach.fandom.com/wiki/Seeker?oldid=175940"
Community content is available under CC-BY-SA unless otherwise noted.