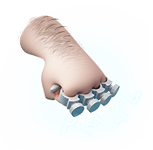 "Makes the hero attack the nearest defensive building with his fists, causing it and buildings behind it to be shocked."

Retrieved from "https://boombeach.fandom.com/wiki/Shock_Knuckles?oldid=176136"
Community content is available under CC-BY-SA unless otherwise noted.