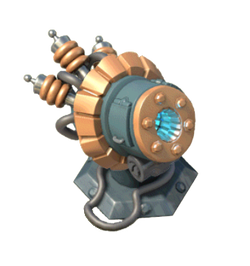 "The Shock Launcher fires shock bombs, similar to those in your Gunboat's arsenal. Enemy troops caught in the area of effect are briefly stunned and unable to move or attack."

Input total Statue bonuses to modify the statistics in the table below accordingly
Retrieved from "https://boombeach.fandom.com/wiki/Shock_Launcher?oldid=128552"
Community content is available under CC-BY-SA unless otherwise noted.