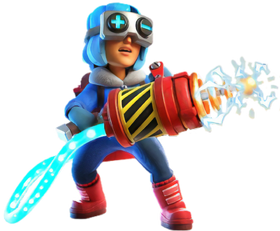 "The Shockaneer shocks enemy buildings, stunning them and dealing moderate damage. Be careful, as your own troops can be stunned by her Shock Beam!"

The Shockaneer looks similar to the Cryoneer but the Shockaneer wears visors with plus and minus signs on them, and carries a tesla gun connected to her backpack via a cyan cable.

Input total Statue bonuses to modify the statistics in the table below accordingly
Community content is available under CC-BY-SA unless otherwise noted.
Advertisement