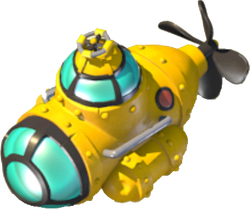 "The submarine can discover underwater treasures. Look for dive locations on the map, and send the submarine on missions. Upgrade the submarine for deeper dives that yield greater rewards."

Map of the Archipelago with all Dive Spot Locations

Retrieved from "https://boombeach.fandom.com/wiki/Submarine?oldid=181408"
Community content is available under CC-BY-SA unless otherwise noted.