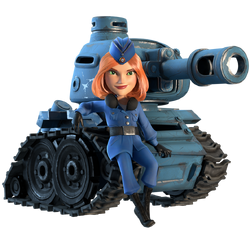 "Tank ready for battle! This baby has a long range cannon and thick armor to boot."