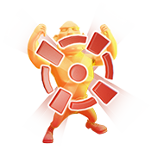 "Limits maximum damage taken even more and taunts all defensive buildings within range, forcing them to shoot at the hero for a time."

Retrieved from "https://boombeach.fandom.com/wiki/Taunt?oldid=176134"
Community content is available under CC-BY-SA unless otherwise noted.