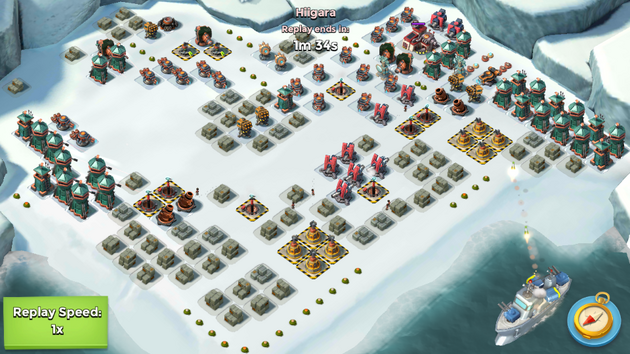 Ahh...good old Gearheart. Effectively a single-player version of an upper mid-level Op base that only allows three hits, this once-every-six-days event has irritated many players. Most of them can be farmed relatively safely up to a point to get some of the rewards, but it takes an interesting blend of singleplayer PvP and Operation tactics to actually beat one of these by destroying the factory. These tactics will be discussed below in a step by step format. One little disclaimer up front: No you do not need to be at end-game tech levels to beat one of these. I killed my first Gearheart at level 39.

Step 1: Find The Pocket And The Stunpoints

Smokerushing specialists (such as Smokey Warrior) should be very familiar with this concept already but it still bears repeating in detail: you need to very, very carefully identify the stunpoints around the factory. You will be attacking the factory with Zookas; at equal armory levels they have the highest damage per boat past level 9 and their range allows them to avoid some stunpoints, and you want to have as few stunpoints to deal with as possible. So, with this in mind, you want to find a spot where the Zookas are in firing range of the factory and as few Area Of Effect turrets as possible can hit them (you specifically don't want Flamethrowers, Mortars, Shocklaunchers, Shockblasters, Lazors or Machineguns in range); very carefully study the firing ranges of these turrets compared to your Zooka pocket. From that spot count how many Shockbombs you will need to disable all of the turrets that are very lethal to Zookas as mentioned above and where you have to hit them; these are the Stunpoints. In the picture of the January 9 2016 Gearheart shown at the top of this blog the key pocket is just to the right of the three flamethrowers north of the factory, and the stunpoints are that set of flamethrowers and the two rockets just south of the factory (along with the three nearby snipers as a bonus). Note, if you are doing the Suicide Run option you WILL get hit by turrets, but you can ignore slow single-target turrets like Cannons, Boom Cannons, Doom cannons and even small numbers of Snipers; the Area of Effect turrets are what will really kill you if you let them.

Once you have identified the pocket and all of the stunpoints, before you make a move you have to consider the following: Given the energy you will use in Flares and Smokebombs to get your Zookas to the pocket, unless you have a LOT of GBE statues it is unlikely that you'll be able to fire more than 4 Shockbombs once the smoke clears. If you only have 1 or 2 stunpoints to deal with that does mean you can double-shock the points to have a longer firing time before they let rip on you; otherwise just assume you'll only get one single Shockbomb duration of firing on the factory, so make it count.

You've found the Zooka pocket and stunpoints...now how do you get to it? You need to find the shortest possible path from part of the shore to the pocket, and a very critical thing to keep in mind; since you are using Zookas you need to be very aware of every single mine you might trigger under the smoke. In the top picture the path is along the right wall, and although the Boom Mines in that path aren't much of a concern the Shock Mines are a very different story. You ideally don't want any mines hitting you at all, which means you'll have to shoot them out beforehand. And given how much energy you'll need to get your Zookas to the pocket and hit all of the stunpoints, shooting out the mines on one of your primary Zooka runs could use up enough of your energy to cripple the attack by preventing you from hitting one of the stunpoints. If this is possibly the case, you need to consider the optional softening run.

There are actually two different attack types that can kill Gearheart: the Suicide Run and the Cleared Pocket. They take slightly different tactics and work on different layouts.

This is actually the more common layout and is also the most difficult to do; one split-second screwup on the Smokerun while you're in range of Rocket Launchers or Lazors can crush your entire attack given the strength of the statue boosts you'll see on the turrets. I will admit that I knew every single tactical aspect of the Suicide Run in theory for quite some time, but "knowing" and "doing" are two very different things, and it took me quite a bit of practice before I finally got my first Suicide Run to work. In a basic nutshell:

Follow the principles above and just keep trying, you will eventually get it. Always consider flaring to the critical pocket in stages so that you can keep your Zookas concentrated in a small area, so there's less of a chance of one of them going outside the smoke and triggering something nasty at you. 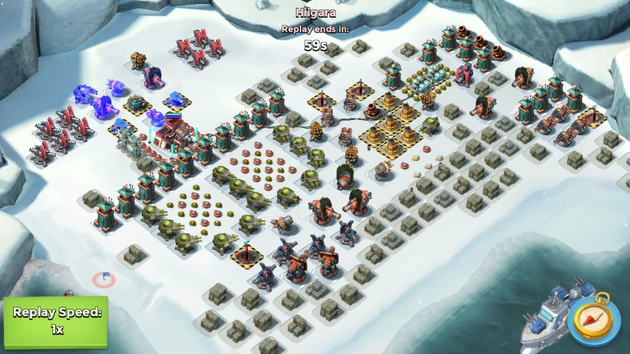 This is a rarer option for killing Gearheart but it is also one of the only effective options if the factory is Shielded, since the shield plus the core HP of the factory can have its health approaching 4 million and the Generators are always heavily protected on the opposite side of the map (as shown above). Unless you are absolutely guaranteed you can take out every generator on your very first attack and be perfect on your other two, you are unlikely to suicide run a shielded factory. However, take a look at October 29 2015's Gearheart above; the factory and the key pocket just northwest of it by the cannons are very, very close to the shore and it's only a 2 stun layout (between the two shockblasters to get both, and between the machinegun and rocket to hit them and the shocklauncher), with those stun points being reachable by your troops once the smoke clears. This is actually a very good layout to use one of your boats for Heavies; they will give key protection from the machinegun, shocklauncher and even the rockets/shockblasters once the shocks wear off, giving you a few precious extra seconds to kill them. In both Operations and Gearheart shielded primary buildings (i.e. the factory or Power Core) are quite often more lightly defended than unshielded ones, assuming that people will always go for the generators first and heavily protect and/or spread those out. Even a modest sized force of Zookas safely hammering a shielded factory or power core can do a LOT of damage in a single attack, so often your best plan is to just say screw the generators and smash through the shield with brute force. Two of my first three Gearheart kills were shielded factories killed in the above manner.

Like with the Suicide run, land and smokerun your forces to the key pocket but when the smoke clears you aren't aiming for the factory; you want to kill every stunpoint instead. It may take two attacks to kill the stunpoints, but if you do you should already be very familiar with the Smokerun that got you to the pocket so you can get a very massive force of Zookas over there to just smash the factory. However, if there are still too many stunpoints for you to get to, consider:

You get three attacks, and in their pristine state most Gearhearts can be at least partially farmed by Grenadiers. As mentioned in Operations Tactics, anything that Grenadiers can hit without getting shot at is an energy farm. So study both the path and the stunpoints, and see if with your Artillery and Barrage plus a Grenadier strike you could actually eliminate a stunpoint and/or clear the smokerun path of mines. In the very top Gearheart example it was critical; taking out the two rightmost flamethrowers and the mines along the path effectively made this a single-stunpoint Suicide run layout, which is the easiest possible Suicide run type to deal with. But only aim for one softening attack; you can easily screw up the Smokerun so always have at least two attacks available to try it.

You've done your planning, and possibly your softening attack. All that's left is to put it in action. If you are planning on killing a Gearheart at lower levels, really dedicate yourself to this goal and Power Powder every attack based statue you have (all Magmas and GBE statues). You'll need every single bit of your potential strength available to pull it off.

THEN CRY HAVOC AND LET SLIP THE DOGS OF WAR!!!

Update since being increased to 5 attacks

Since the update that added 2 more attacks to Gearheart it is now profoundly easier. You can easily spend 3 attacks as Softening attacks mentioned above to drop stunpoints instead of just 1 (or 0). The overall plan is the same in the end.

I must admit I am not a fan whatsoever of the increase to 5 attacks. It significantly lessens the notoriety of beating Gearheart. It was already defeatable with 3, and harder challenges are good; the feeling of accomplishment is all the sweeter when you beat a harder challenge.

Retrieved from "https://boombeach.fandom.com/wiki/User_blog:Kiljaedenas/Gearheart_Tactics?oldid=133241"
Community content is available under CC-BY-SA unless otherwise noted.