I see lots of people complaining about the Matchmaking system being based on Victory Points. It makes me think, "How come I never had problems beating my opponents, and how come I never had to worry about having too many victory points?" I thought I could discuss my overall strategy here so that others can learn from it, and be more successful in their own conquest.

Today, I dug through some history logs here on the wiki to find out how my Victory Points have increased. I looked at some edits that I did on the You page starting at XP level 31. I came up with this data:

As you can see, my victory points steadily increased. I never lost victory points in large amounts. My HQ never sat on the beach. Also, keep in mind that I never pushed for Victory Points. I raided when I needed resources. I never had trouble beating the people who appeared on my map. From what I can remember, the matchmaking always paired me with opponents around my level. I made the graph below just to show how my victory point count related to my XP level. Maybe it could be used as a guide as to what VP count is good for these XP levels. 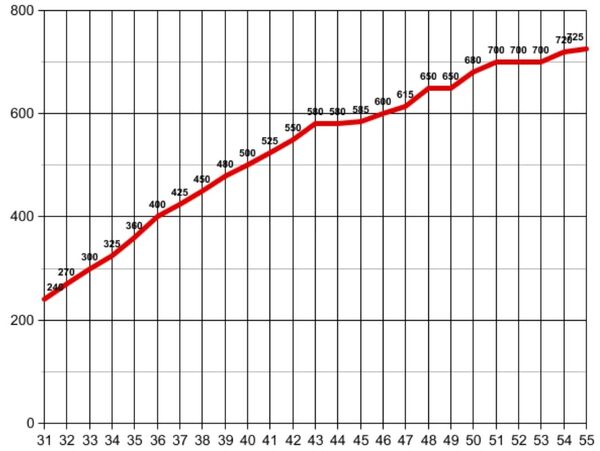 But, why was I always able to beat people a few levels above me easily? Well, my general strategy consisted of prioritizing offense and treating each attack composition equally.

It was evident from the beginning that good offense is most important in Boom Beach. No matter who you are or how good your base is, you are always going to get raided. Do not get too discouraged by the fact that your base is constantly getting destroyed. You cannot expect your base to protect your resources in the early game. The best thing you can do is maximize how quickly and easily that you can bring in resources so that you can start your upgrade before getting offline. I always made sure my Landing Craft were as high as I could get them. So many people neglect their Landing Craft, but the extra troops make a bigger difference than you think. This advantage cannot be ignored.

The next most important building in your arsenal is the Sculptor. Statues are very valuable and powerful assets. Many people see this, but the mistake they often make is loading up on Life and Ice Statues. Like I said before, focusing on defense is almost useless, so Ice statues are useless at the beginning of your game. Life statues are a big waste of a statue slot as well. The extra income they bring in is so negligible compared to other statue choices. The sooner someone realizes that, the better off they are. Attacking will get you so many more resources in a much shorter period of time. My opinion on Power Stone Chance statues is: do not keep them until you get a Power Stone Chance masterpiece. PSC guardians and idols are a waste of space. My statues always consisted of several troop health and Gunboat energy statues as well as a resource reward statue. With those offensive statues, I could raid effectively and earn resources quickly.

As an example, here is the statue set that I had when I was XP level 34. (Statue appearances historically inaccurate)

Concerning the treatment of each troop composition, I always made sure that I took advantage of the potential of each one. One common behavior of many people is they see one composition as being the most powerful, so they focus exclusively on upgrading that composition and designing a base to defend against it. The problem with that is the fact that sometimes, one strategy is going to be much more effective against some bases than it is against others. I always made sure to upgrade all the troops fairly evenly. That way, if I came across a base that could be defeated easily with Tanks, I could use tanks. Then, I may come across a base that would go down easily with a warrior attack, so I would be able to use warriors. You need to be able to look at a base and have the required troops to most effectively take it down. That way, you can be successful in taking down the opponents that you come across no matter what base they have.

With these ideas in mind, I had a lot of fun and success battling my opponents and working my way up. If someone who was a higher level than me appeared, I did not see it as a disappointment. I saw it as a great opportunity to be challenged and win a great haul. I hope this helps you newer players out there. If you have any questions, feel free to comment below. Thanks for reading!

Retrieved from "https://boombeach.fandom.com/wiki/User_blog:King_Dragonhoff/My_Victory_Points_and_Overall_Strategy?oldid=101151"
Community content is available under CC-BY-SA unless otherwise noted.