In one corner, we have: 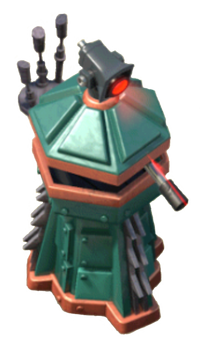 Sniper Towers, or Snipers as I like to call it, are a single-target defense that deals a moderate amount of damage (as compared to the lower DPS of splash defenses or the higher DPS of the Cannon family). While one Sniper Tower alone with no assistance from Ice Statues or other defenses might not be enough to cause damage to a high level Tmed, two can cause some trouble, especially with Ice Statues and/or other defenses like Damage Amplifiers.

And so, in the other corner, to face this monstrosity, we have: 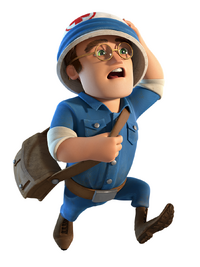 Medics are the life blood of Tmed. Without them, you'd simply call them Tanks. Or T. And apart from the name change, it'll be a lot less sustainable army than you think. With them, the army will not call Rocket Launchers, Machine Guns or Mortars threats since the Medics do their job well against a few of these defenses. One Medic alone can outheal an unassisted Shock Launcher, a boat of five Medics can handle two unassisted Rocket Launchers, and two or three boats of Medics can easily negate most of the damage from lower level Cannons, Sniper Towers, and even Mark I Shock Blasters.

The following table shows the healing output per second of each configuration of Medics. Four values of Medic count are considered here:

Now, for both of them to battle each other.

So, the battle begins.

Well, not those two Team Fortress dudes up top. That is completely off-topic.

Retrieved from "https://boombeach.fandom.com/wiki/User_blog:MagmaHound/Sniper_Tower_vs_Tmed_Medics?oldid=134481"
Community content is available under CC-BY-SA unless otherwise noted.