So this is a little blog about upgrading order. I guess.

But first: HQ always comes first, doesn't matter. As long as you got the XP requirement for unlocking the next level of HQ, do it. There's no downside and you get more offense and defense capabilities.

Significant ones to do include:

Generally there's no definite "best" upgrading order for stuff, but you may do want to upgrade these at your own discretion. Upgrading multiple army compositions at once seems overwhelming but is good in the long run.

Among all these, I'd say Sculptor comes first because that means more potential Magma/Dark statues on your base which improves offense :)

This is known to be one of the most popular armies.

Heavies and Zookas. What else did you think? Might include Medics.

Tanks and Medics, notorious combo for not losing troops.

Scorchers and Tanks, another good army composition for no-loss raiding.

Defense is something that you can ignore at the expense of getting raided by practically everyone who finds your base as well as take away any chances of you getting Intel and Diamonds from defenses or defending Hammerman. Ever since the beta of Boom Beach, defense is vital to prevent your resources from being stolen by other players. As such, defense can be upgraded to increase your XP in order to upgrade your HQ. Again, there is no definite "best" upgrade strategy for defense, just do whatever that floats your boat (and base).

As a side note, the Weapon Lab fits anywhere on my suggested upgrade order of defenses, depending on how you intend to use Protos on your base. If you are less active (therefore being less able to obtain Proto parts) or do not intend to build multiple and/or high-end Protos, it will not be a priority. 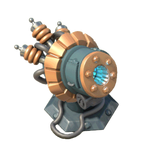 Shock Launchers are a powerful weapon to upgrade. They can stun a large amount of troops at once, immobilizing them for up to 3 seconds at a time (as compared to their fire rate of 5 seconds per munition). As your base can hold up to two Shock Launchers, they can immobilize troops indefinitely given that they are leveled high enough. Although it is expensive and it deals low amounts of damage, it will do a great job against RZM, Tmed and SW armies. 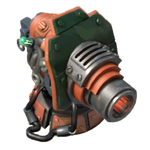 Boom Cannons are the ultimate bane of high-health troops such as Scorchers and Tanks, dealing extremely high damage per hit which is capable of killing off lower-leveled Heavies or Tanks outright and putting a decent dent in a Scorcher. Your base can have up to five Boom Cannons, which exceeds an average of one devastating shot per second if they are all functional. They will be good to mess with Tmed, Scorcher-Tank and Hooka armies, though they will definitely be less effective on say, RZM.

Rocket Launchers are great threats to RZM and full-Zooka armies, both of which overpower Boom Cannons easily. They are hence a complement to Boom Cannons; the Boom Cannons take out the meatshields whereas the Rocket Launcher takes out the infantry. Though it does rather negligible damage to Tmed (unless massed like in True Love), it will still do decent long-term damage against un-medded Tanks. 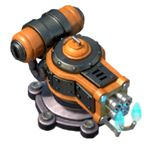 With high-level Shock Launchers, Boom Cannons and Rocket Launchers gearing up to provide the captaining force against the common armies of Tmed, Hooka, RZM, Flamethrowers cover the last base by providing one half of an anti-SW defense (the other half being the Machine Gun's doing). Burning Riflemen and Warriors to cinders swiftly and mercilessly, they are useful to kill off large chunks of Riflemen off an RZM army as well as Warriors 'round the HQ when upgraded to a high level. 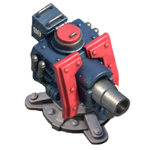 4 or 5 Boom Cannons may not always be enough to support the defense against Tmed armies (any Bart at the beginning will most likely take care of all but two or three Boom Cannons). In that case you get five or six Cannons to weaken those high-health troops. They may not be as good as the Boom Cannon when it comes to high-health troops but they are certainly better to face massed infantry when compared to the Boom Cannon; however due to their one-shotting nature on such troops like Riflemen or Zookas, upgrading them will only increase their ability to withstand more enemy firepower when it comes to dealing with infantry. As Boom Cannons can pose a bigger threat, Cannons can often be overlooked, and maxed ones (or even those level 20s) can definitely teach them the error of their ways (dealing roughly 85% of the BC's DPS).

Mortars are your first splash defense and remain a fundamental part of driving off massed infantry such as Rooka. While alone they may be rendered less useful owing to the possible presence of Medics (three maxed Medics can outheal a maxed Mortar), in groups of three or four they may pose a big trouble to Riflemen, Zookas, Grenadiers, Warriors and even the Medics themselves. Mortars firing at the same time can be a pain as not many troops can survive a blast dealing a total of about 1,600 damage (more even with any Damage Amplifiers or DBD statues) from the four Mortars you are given. 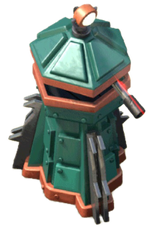 Sniper Towers are good to deal moderate damage and are a good all-around defense. At high levels, as you can notice on many NPC bases above level 40, they can easily shred through lower-leveled Heavies and Tanks as well as snipe off important Medics occasionally. With enough DBD or when Amplified, they can certainly double as a Cannon built to take out RZM or other infantry armies (they do fire twice as fast as a Cannon and 2.5 times faster than a Doom Cannon). They are one of few defenses capable of finding Grenadiers and snipe them within a few shots (however one Sniper Tower's damage alone can be outhealed by any nearby Medics). They are one of the cheapest towers to upgrade, at least until level 20, but their usefulness can already be proven by that level. 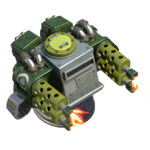 Machine Guns form the other half of a good anti-SW defense (as explained earlier), as their damage is extreme to those nearby. Especially deadly to Warriors (and to a lesser extent Riflemen), they can also pose a minor threat to Zookas, their inaccuracy against them balanced by the fact that it only requires a few hits to kill them. Unfortunately, their low health allow most Machine Guns, even with a bit of Building Health, to be taken down by two Artillery shells. They are most useful to deal with any SW attacks as well as pure Rooka.

Mines can be considered less prioritized especially since they are upgraded in the Armory, not by having your builders crowd around it for a day or so. As your Armory may be more occupied with upgrading offensive capabilities most of the time (for which it should usually be), your Mines may get neglected.
Despite this, each type has their own powerful single-use abilities that should not be overlooked.

Normal Mines come in major abundance as the most common Mine type to be seen in your base. They are especially useful to take out infantry, such as Riflemen and Zookas, and in large amounts, can dispose of Grenadiers and Warriors. Though Medics can be a major counter to its effect, which largely negates its use, without these Medics, infantry will have lots to worry about if unprepared (low-level Medkits may not always be enough). They are also useful to take out Critters when in pairs or triplets (which require level 18 and level 14 Mines respectively to work), minimising the effectiveness of their distraction.

Boom Mines are a detriment to high-health troops. Though not usually fatal, they can severely damage Heavies and Tanks and otherwise destroy Medics, Warriors and Grenadiers in a single trip. Of course, if they are well-upgraded, otherwise their rather measly 1,000 damage may be of little significance to high-level troops which will, with the exception of the most fragile troops, survive.

Shock Mines are a good time-waster, regardless of whether it is upgraded or not. As they are unlocked only at HQ21, the damage they deal will be very light for enemy troops at that level, even on Zookas. The shock time, however, will be useful to put a setback in armies relying on Smoke Screens, and give your defenses some extra firing time.

If your offense is maxed for your HQ level, and you still don't have enough XP for the next HQ level, you have two choices for what to do next: to upgrade defense, which was covered above, or to neglect defense entirely, and upgrade the economy buildings: the four Resources' storages and producers and the Vault. With the exception of the Vault (which is extremely useful and can be prioritized over Armory at lower levels) and any storages you may need to build or upgrade for your offensive and defensive upgrade purposes (which is entirely optional, but does help save you a lot of Diamonds), the rest, such as Residences may be rather neglected due to the fact that attacking for resources can cover the costs of almost every upgrade.

Some play styles, such as a typical passive play style might actually prioritize economy over offensive upgrades. Examples include Thedukeofwinsor's Unopposed Progression guide, as well as the rather common turtling play style (some statue lineups of this play style include those composed mostly, if not entirely, of Ice and Life Statues.

Your economy priorities are likely to change as you progress through the HQ levels, at least that of the three building resources. A general guide of a typical player's needs of Wood, Stone and Iron is in the table below. It's more of a general pattern that you may experience during your journey and I have chronicled these experiences after observations from my accounts. Take the table as a reference and not a hard guide to live by, because your shortages of resources may differ.

As for Gold, it's importance to you depends on your intentions. You're definitely spending more Gold when upgrading the late-game troops such as the Tank or Scorcher than you are when upgrading other things like Riflemen or Mines. Your needs for it can increase when you are doing more expensive Armory upgrades, such as when you are leveling up your Grenadiers from level 1 to level 10 quickly.

The list below is not in any particular order, simply an overview of how you can benefit by upgrading each Economy Building. 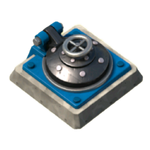 Certainly the only Economy Building that I would classify as fundamental to your base setup. Instead of producing Resources of any kind (or providing a sizable storage; it does have one but it would be rather negligible in most cases), it protects these Resources. Needless to say, without a Vault, anyone who chances by and raids you will take literally everything from you. With a Vault, at least you wouldn't lose everything. If you are rushing through HQ levels, and can only choose to upgrade one economy building (but why anyway?) this is the economy building for you. 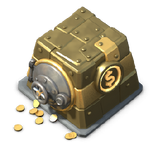 You will want to max these out for your Armory upgrades, well unless you want to spend a ton of diamonds every time you do an upgrade due to insufficient storage space. Out of the four types of storages, this is the only one that requires you to max out all of the storages if you wish to perform all upgrades requiring its resource without spending a single Diamond (you can get away with having 1 each of the Wood, Stone and Iron storages being level 8 if you take into account a level 20 Vault). Besides, you will be more than likely to get stocked up with Gold during a raiding session, and upgrading Gold Storages make sure that the amount you cannot store from raiding is minimal.

Retrieved from "https://boombeach.fandom.com/wiki/User_blog:MagmaHound/Upgrade_Order_of_Stuffs_(I_guess)?oldid=129324"
Community content is available under CC-BY-SA unless otherwise noted.